Far From Home | Stills Brought To Life | The Cinema Experience

Far From Home is a project I had been inspired to work on for a long, long time. Initially, the spouts of inspiration drew from the work of artists such as Gregory Crewdson. I wanted to create a series of images that had a tableau-style influence, although could all be interpreted as standalone pieces or as a series of connecting, narrative images. Recently having launched The Cinema Experience, I felt as though this project could be a prime example of what that service offers. I created a 4-image set, a short film, and a custom score + sound design with my team. Today, I'm proud to show it to you, as one single experience. Please turn your volume up while watching the film above.

We scouted for weeks on end to find the perfect motel, and ultimately discovered The Mac Arthur Inn, located in Long Island, NY. At first glance, the location provided us with the perfect atmosphere for this story. We fell in love, in a way.

The story itself is meant to be fairly open-ended in nature. Our two characters both exist in frame, contrasting one another, however they don't fully interact. The character in white is aware of the character in red, however that sense of awareness is never given back. I wanted to include themes that incorporated elements of mental health; specifically anxiety and split-personality. Initially, my interpretation of the story is that the two characters are in-fact the same individual, with the character in red being a reflection of the character in white, hence the lack of pure interaction. However, quite a few individuals have offered their interpretation of the images, as well as the film. I do find it fascinating, and I enjoy how different people see the story in different ways.

Below, you can view the four images that set the groundwork of this story. I'd love to hear your interpretation as well, so feel free to send an email if you'd like! 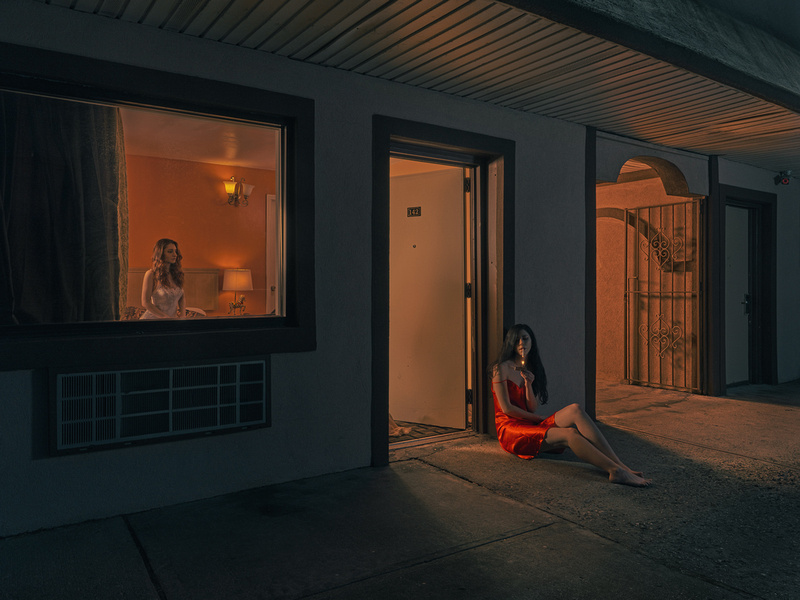 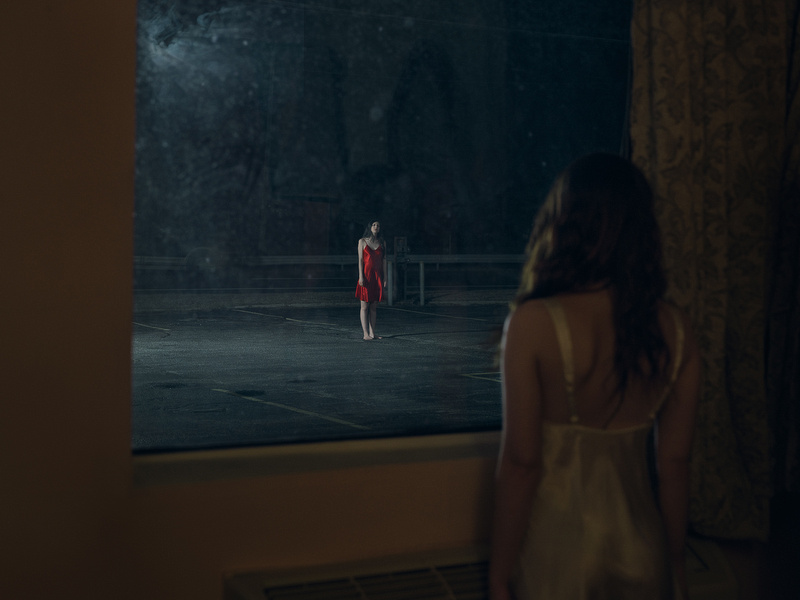 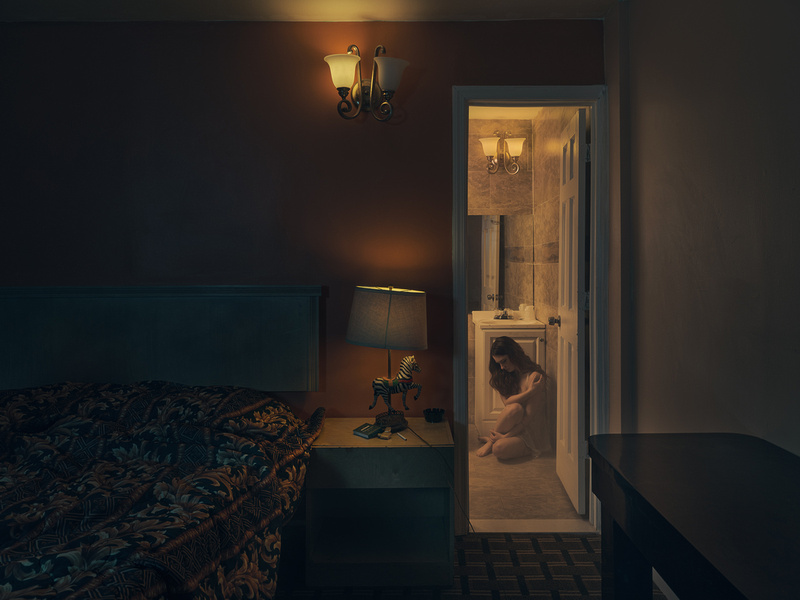 On the technical end, we wanted to create a fairly high-production series. I chose to shoot the stills on a Fujifilm GFX100, all with the stellar 32-64mm zoom lens. I felt that smooth tonality, crisp details, and high color fidelity would be necessary for this set, and the camera did not disappoint. As far as the lighting, I used a group of four Flashpoint Xplor 600 lights, all with their own unique Rosco gel. We did this not only to create color contrast, but to emulate the look and feel of a period piece, specifically something that appears to be late 70s-80s.

Although, by far, one of the primary tools that helped us craft this look were the Elinchrom Snaplux modifiers. We primarily stuck with the 60cm Octabox and the 35x75cm Strip Box. The beauty of these modifiers, in my opinion, is how well they render light falloff. Not only are they extremely compact and portable, but they disperse light in an even, balanced way. Hot-spots and leakages are of no concern, and the quality of these modifiers is very high.

On the video end, we chose to use the Blackmagic Pocket 6K, shot in raw. The editing was done in Adobe Premiere, and the color work was completed within Davinci Resolve. We were all quite happy with how clean the low-light footage was from this camera, as well as the highlight rolloff. It's compact, but packs quite a punch.

Below, you can see a few behind-the-scenes images, as well as an aerial video of our set: 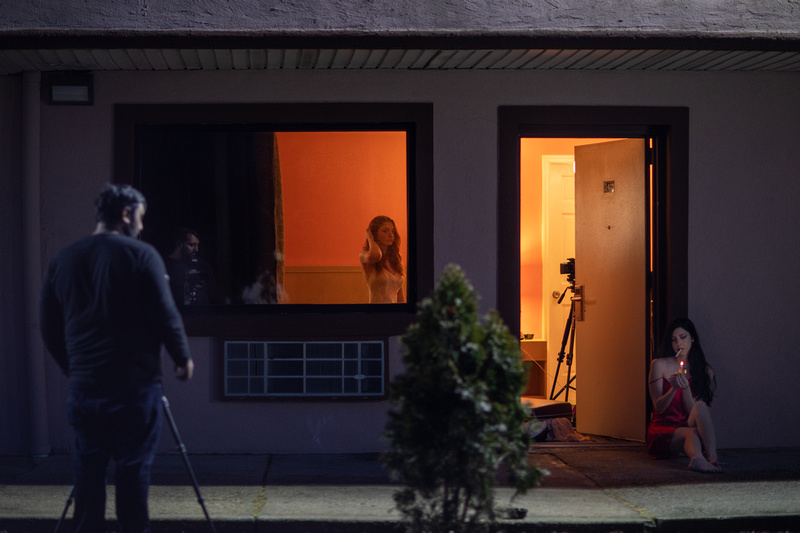 In closing, I decided to interview the cast and crew about their thoughts on this project, as well as their interpretations of it. I do hope you, whoever you are, found this hybrid of photography, film, and music enjoyable. Please share it with your friends, family, and pets.

“Working on this project was the best set i’ve ever had the privilege to be a part of. An incredible group of creatives all working to make something big and bold. I had wanted to act as well as model for years now, and getting to do both was truly a gift. It pushed my limits and made me realize just how far I can go with the art I get to be a part of. I couldn’t have asked to work with a better, kinder, and more ambitious group of people. This project specifically feels very close to home. I saw it as these two people that maybe had a lot in common, that were both struggling yet couldn’t come to a point where they could come together to help each other. In the end, the character I play ends up alone, but has herself, and that’s enough. Sometimes knowing you still have yourself when you feel alone is all you really need to get by.“
Caitlin Davidson
Woman In White

“Modeling this concept was a delight, and getting into the mindset of this unique character was easy to empathize. I think many people can relate to the feeling of being trapped in a cold and dark place metaphorically, where you can’t escape the depths of your mind. Being the one on the outside was an interesting perspective, because the environment was endless yet the character was still alone, or at least out of reach from receiving any sort of aid. I find that the concept touches feelings that are important to express, as they’re relevant to many individuals and relationships. I enjoyed the experience, we went into depths for this project, and being able to explore this realm with a large set was almost surreal.“
Emily Nelson
Woman In Red

“The Far From Home series is a dissection of an individual’s sexual frustration. What is the "hourly rental" motel room but the quintessential temple for exercising such demons. Hidden amongst the tense closeups and rapid cuts between our two characters, i envisioned them living through the wide range of emotions that come with frustration. It builds from a place of tension and anxiety. I used scenes such as chain-smoking, tapping, and water droplets to build this atmosphere. Later in the film, I chose to escalate those “nervous ticks” to complete anger, aggression, and darkness. To offer a satisfying closing, I also decided to inject just a bit of “relief” at the end. In a sense, the storm was over.“
Abe Bello
Director of Photography + Editor

“When I was creating the score and sounds around this awesome cinema experience film, I wanted to achieve a feeling of uncertainty and something out of the norm for the audience. Far From Home has elements of horror and abstract storytelling, so I wanted that to reflect in the music and sounds being heard. First, I created sound elements that would create lots of open space, horror and edgy feelings for the audience, including a series of repetitive tones. Then bringing in the music slowly and building the intensity with edgy musical elements. Overall, I had a blast working on this project and I think every person who watches this will have a unique interpretation to this story we created, which is really fascinating in its own.“
Christian Ladigoski
Score + Sound Design

“The approach was to keep the color in the same world that Aakaash created in the photo set. This involved a blue-ish white exterior and warm interiors to fit the personalities represented in the film. Outside was stark and cold, inside was warm and comforting. The idea was to reinforce this concept in the color grade, while adding my own flare to it as well. Outside, I accentuated the reds in her lips and dress to enhance the anger. Emily’s dress amongst the cold darkness kind of draws our eye to her, makes us wonder about her, and possibly gives us the same feeling Caitlin has toward her. Maximizing the emotion of a piece or scene is the whole job of filmmaking and all departments should work together to accomplish that goal, so everything should be approached with the goal to maximize the emotion in a piece or scene. Anything else you add is just icing.“
Paul Del Vecchio
Colorist

“Working on the set for Far From Home was quite enjoyable. It was a stress-free environment, and the team had the perfect chemistry. The eerie atmosphere played an integral role in developing this concept, and I believe it was as close to perfect as we could find. To me, the story portrayed elements of escape. A young girl fleeing to a motel just to "get away", but ends up finding herself in a sense, or maybe even losing herself. In a way, the solo interactions of the characters represented a "spirit world" to me. Some kind of purgatory between the land of the living, and the land of the dead. I saw elements of possession, love, and fear. Perhaps, even crime, or murder, given the expressive nature of the acting. Aakaash is a man who is very passionate about his work, and makes everyone feel at home. He is also very knowledge, and doesn’t mind passing what he knows on to you. Working as a Grip for The Cinema Experience team has helped me understand lighting techniques a bit more, and i hope to learn even more next time."
Matt Bell
AC, Grip, & BTS